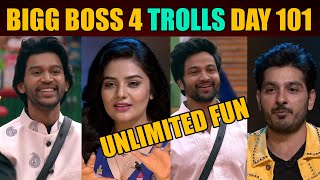 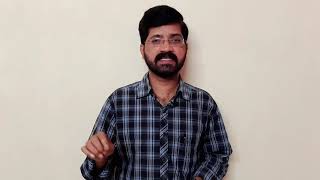 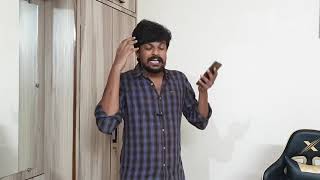 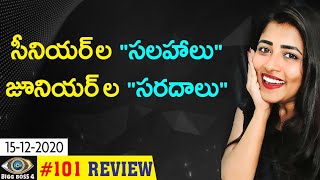 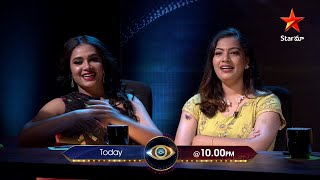 Contestants were dancing together for a friendship song from Ram's movie. As the day progresses, Abhi and Harika and Harika and Akhil are seen conversing about last night's task.

Little more further, the contestants of former seasons of Bigg Boss join the housemates for a jolly talk. The housemates met them virtually because of the present-day COVID situation. The panel consisted of 5 people from the previous seasons, namely- Hari Teja from season 1, Geetha Madhuri from season 2, Srimukhi and Ali Reza from season 3. Initially, the discussion started with praises regarding the beauty of the house and how huge it was with extra added places in it.

In a conversation, Bigg Boss season 1 finalist Hari Teja said that they jumped into the game with no-knowledge and added that she was envious of the added amenities in Bigg Boss house as the seasons progressed.

Bigg Boss 2 runner up Geetha Madhuri said that they were anxious and nervous during the finale week.

To move on.......Srimukhi asks Sohel about his expected qualities in his life partner. As an answer to this question, Sohel said that his fiancé should be friendly and also added that she should be able to control him when he gets angry which left everyone in splits. The panel tried to pull Akhil's legs of his proximity with Harika and Ariyana. Akhil stated that he was feeling low after the eviction of Monal and that she broke his promise and nominated him without a valid reason. Ariyana was appreciated for her strong and courageous attitude of standing whole and sole against the entire house. Abhijeet was appreciated by Hari Teja for keeping cool as a part of which he thanked his female fans and dedicated a song to them. Harika was appreciated too for her decision-making ability. Before leaving, the former contestants were asked to give some tips and pieces of advice for the contestants. The former contestants asked the present contestants to keep their call, chill out and enjoy every moment of their finale week which they would be missing in a few days.