Hindi 31st Jan, 2021 Reality Show
Salman Khan mocks Rubina Dilaik for using erratic words like "dividation" and "rampanting" during discussions in the house. He teases her not only using English but also for making up her own words. He then advises her not to repeat such things again.
CRITIC 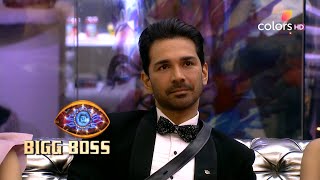 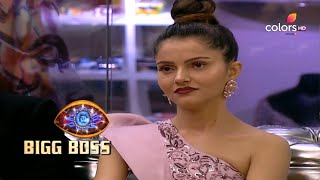 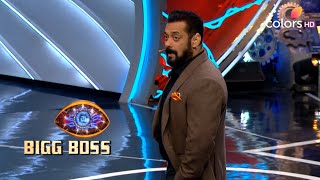 The continuation of the Weekend Ka Vaar episode starts with Salman Khan giving some hints about this week’s elimination. After a formal chat with the housemates, Salman Khan declares an entertaining game of eating "chaat" and questions the players to prepare a chaat according to the character persona of other housemates.

The next task gets assigned to the housemates as he announces the "Aly and Devoleena chat show" and describes the rules of the game. Rubina Dilaik was called on first to be grilled by Devoleena's questions followed by Abhinav’s turn who was then questioned by Aly Goni. Aly inquires him whether he became heedless after Jasmin got evicted. Abhinav disagrees with Aly's allegations and says he never became overconfident after Jasmin's elimination.

The next grilling session was done to Rakhi Sawant where she aces all questions. Then Rahul Vaidya followed by Arshi Khan and then finally Nikki Tamboli who seemed pretty dull after Salman Khan shunted her in the previous episode.

After the rapid-fire session, actress Mouni Roy enters the show with and joins Salman Khan after giving an enchanting dance performance. Salman likewise dances with Mouni and then they encounter the contestants. The housemates were then introduced to a hilarious game where they have to ride a mechanical bull and respond to provocative questions crafted by Salman Khan and Mouni Roy. After an amusing game session, Mouni Roy bids farewell, and the show continues with Salman Khan coming to the main topic.

He talks to Vikas Gupta regarding his personal matters and questions him why would he speak about such things on national television. Vikas Gupta explains his side of the story and additionally says that the Bigg Boss house is like a safe space for him. After a lengthy chat with Vikas, Salman proceeds with this week's elimination. Due to high votes, Rahul Vaidya and Nikki Tamboli are declared safe. Then Devoleena who is Eijaz Khan's proxy is declared safe and Vikas gets evicted. Salman reminds him that he holds the Joker card and he can use it now, but Vikas refuses to use it as it is not his way of playing the game. Vikas then gets a cordial farewell from the housemates as he leaves the house.

Salman Khan mocks Rubina Dilaik for using erratic words like "dividation" and "rampanting" during discussions in the house. He teases her not only using English but also for making up her own words. He then advises her not to repeat such things again.