Raja Cheyyi Vesthe is a 2016 Telugu action drama starring Nara Rohit, Isha, Tarak Ratna, Shashank, Sivaji Raja, Rajiv Kanakala and others. While he is making a short film, an aspiring film Director sees a girl in his frame & falls in love with her. He wants to make an action film. The opportunity presents itself when a Producer asks him to write a climax scene about a don's ruthless murder. Who is this Producer? And, how is this related to a criminal Manik, who kills people ruthlessly for money? 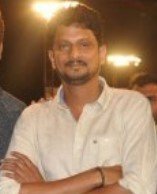