Home News Sita Ramam Is A Film Which Every One Should Watch In Theaters: Prabhas

Sita Ramam Is A Film Which Every One Should Watch In Theaters: Prabhas

Rebel Star Prabhas is in all praise for the film.

Star hero Dulquer Salmaan - Mrunal Thakur starrer Sita Ramam has Rashmika Mandanna in an important role. The prestigious film 'Sita Ramam' is produced by star producer Aswini Dutt under the banner of Swapna Cinema and is presented by Vyjayanthi Movies. The movie will release worldwide on August 5. Directed by Hanu Raghavapudi, the audience has high expectations for this film. The trailer, teaser and songs of the film have received excellent response from the audience of all sections. Pan India Superstar Prabhas participated in the film's pre-release event on Wednesday as the chief guest.

Rebel Star Prabhas is in all praise for the film. "Sita Ramam trailer is very impressive. Dulquer Salmaan is a handsome hero, Superstar. Mrunal is beautiful. Rashmika is seen in a different role. Making a love story so grand is possible only when you have a passionate producer like Swapna Dutt. Sumanth does a role only if it is special. Looking forward to see his role. Telugu cinema is lucky to have a producer like Aswini Dutt. Sita Ramam is a film which should be watched in theaters. We don't stop going to temple because there is God in our Pooja Room. Theater is the temple for our industry. You need to watch the film in theaters for sure," he said.

Dulquer Salmaan said, "Very happy that Prabhas came to this event. Sita Ramam is a great Journey. Swapna Dutt is Wonder Woman. Aswini Dutt is my favorite person. They show me a lot of affection. Hanu Raghavapudi is a director with great passion. He had a great dream called Sita Ramam. Thank you for making me a part of that dream. I have seen many places during the shooting of this movie. Sita Ramam is a very special film. Mrunal played the role of Sita very sincerely and beautifully. Sumanth is my big brother. Vishnu Sharma's role is excellent. Tarun Bhaskar's smile gives great energy. Sita Ramam is a larger than life movie with excellent music and technical values. Everyone should watch this movie in theaters".

Maverick Director Nag Ashwin said "Thanks to Prabhas who attended this event. I saw 'Andala Rakshasi' in the theater when he was an assistant director with Shekhar Kammula garu. Loved the promotions, visuals, and music. Hanu Raghavapudi as a director is an inspiration. Sita Ramam has been shot brilliantly. I liked it very much. Dulquer Salmaan's Vishwaroopam will be seen in the film. His performance is next level. He makes the audience laugh and cry and will be remembered forever in the role of Ram. It is a pleasure to introduce Mrunal in Vyjayanthi movies. She looks very beautiful in the role. Sita Ramam is a great love story. Hanu has shot it in such a beautiful way that everyone will be jealous (laughs). Swapna, Priyanka and Aswini Dutt worked very passionately. You all will like the movie". 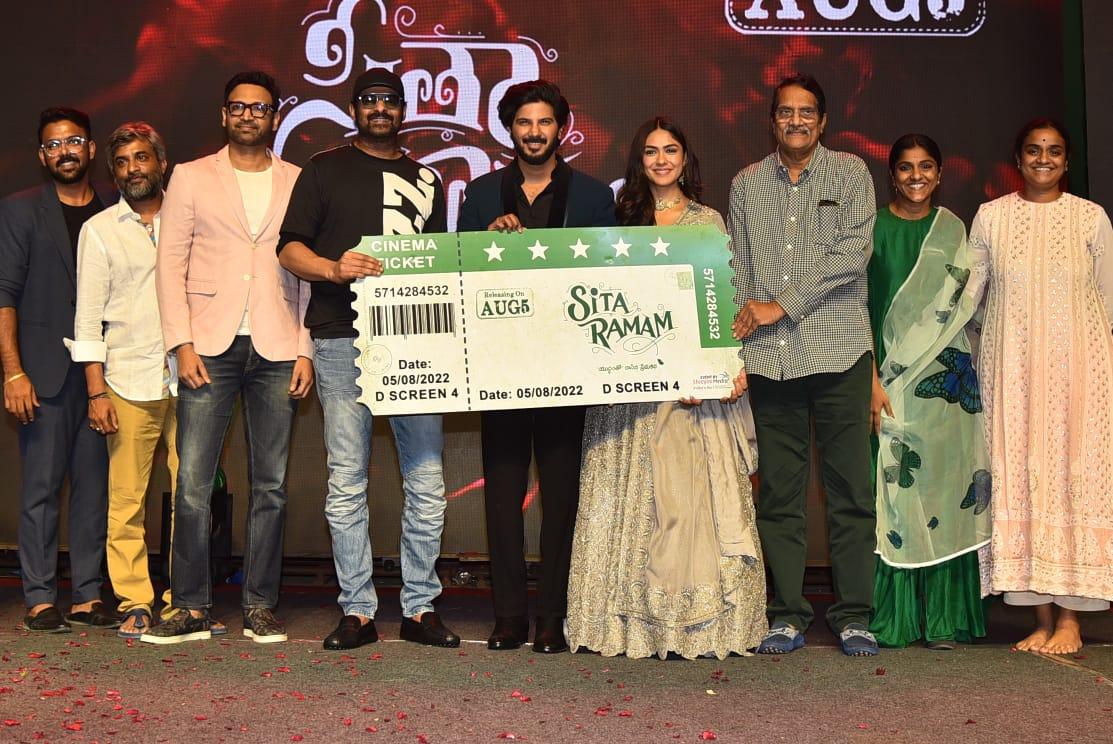