Telugu 18th Oct, 2020 0h 56min Reality Show
Nag announces that Star Maa Telugu is awarded as no.1 GEC channel in the country. There is going to be hilarious performances and activities played, along with fun sports. Will there be elimination? Wait and watch Bigg Boss.
CRITIC 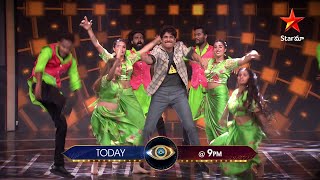 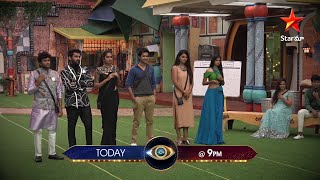 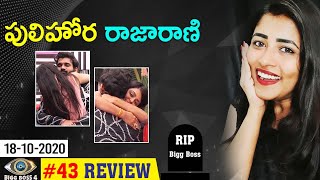 Evergreen Nagarjuna was back to set the stage on fire with Bigg Boss Season 4 hosting.

As usual, Sunday was a fun-day with housemates playing different games and Nagarjuna encouraging and pulling their legs during the game.

The focus quickly shifted from a jovial environment to a serious phase where housemates one after the other was declared safe.

The last housemate to be declared safe was Abhijeet. Monal and Kumar Sai were left, and they were asked to enter the confession room with their luggage packed.

Immediately Nagarjuna made an announcement asking Kumar Sai to come on to the stage. Kumar was eliminated, and Monal got saved. Akhil was all joyful for Monal getting saved.

Kumar entered the stage and said a few words that he was happy playing the game and wishes to play even more good games in life. He thanked fellow housemates and host Nagarjuna for the time he had in the house. He also thanked Bigg Boss for sending him soon. Ariyana very optimistically says Kumar was a genuine player.

On the stage, Nagarjuna asked Kumar to compare the housemates with vegetables he has given. Just then, Nagarjuna announces that Star Maa is awarded as No.1 GEC channel in India.

He compares one housemate with onion, Avinash as the joker of the house used in games, Akhil is compared with curry leaves, which Akhil doesn't approve. He describes someone like Rajashekar as bitter and Abhi as the cool cucumber.

He opines Lasya to be a person who lives in a shell, without opening up with others. Kumar compares Noel with cabbage, and he also says he loves him.

He compares Divi with Pineapple hard outside and sweet inside. He compares Harika with Brinjal as he hates Brinjal. He says Mehboob is easy going and Sohel has a good fighting spirit.

Finally, before ending the show he lands big-bomb on Amma. Accordingly, Amma has to clean the washrooms.

Nag announces that Star Maa Telugu is awarded as no.1 GEC channel in the country. There is going to be hilarious performances and activities played, along with fun sports. Will there be elimination? Wait and watch Bigg Boss.