Telugu 13th Oct, 2020 Reality Show
Housemates turning to household items? Avinash turns into bed with Amma Rajasekhar spreading on the bed, Sohel turns into a kitchen and gets scrapped, while Divi turns into a garbage bin which Amma uses gracefully.
CRITIC 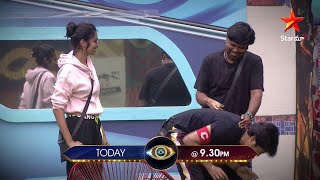 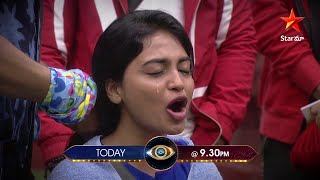 #BiggBoss Tho Housemates Deal 👍 Or No Deal 👎 #BiggBossTelugu4 Today At 9:30 PM On #StarMaa 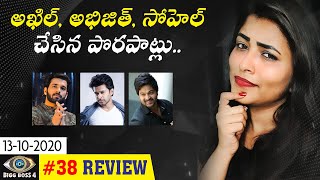 The day 37 Bigg Boss Telugu 4 aired on October 13th began on a fun note. Bigg Bodd turned Avinash to bed and Amma Rajasekhar spread on it. Sohel turned into kitchen and Amma scrapped Sohel to his best. Divi turned trash bin and Amma was hilarious in using the trash bin. Icing on the cake was Akhil turning into a loo and Avinash using the loo.

Avinash wrote a love letter on a lighter note to Divi, and asked Amma to deliver which Amma refused. Avinash gave the letter himself which Divi read and called Avinash a jester.

Abhi tried to put some cognizance into Sohel's thought process suggesting him to control his anger. Suggestion vent in vain as Sohel again had a tiff with Avinash lost his temper and vent his anger on the bathroom.

The house was split into two teams for performing tasks this week. Ariyana and Akhil are in charge of their teams. Every time buzzer rings either of them had to ring the bell to get a chance to perform the task. The opposite team had to give them Gold coins as reward.

Akhil rang the bell first so his team had a shot at the task where a male member had to shred his entire clothing and Kumar Sai performed the task.

Ariyana ringed the bell for the second time where in the task was to give away all the belongings to Bigg Boss and Abhijeet donated his all.

Akhil rang the bell for the third time and this time it was about cutting the hair and getting it dyed in red. Harika came forward in spite of the fact she promised her brother she wouldn't cut her hair. Though Divi was in the team still Harika came forward which remains highlight of the episode.

Akhil rang the bell for the fourth time and Kumar Sai performed the task passionately, holding a sand bag with his right hand which looked very painful.

Ariyana's team got a chance to drink a juice made of different ingredients which could trigger a puke. This time Lasya performed the task and won it for Ariyana.

Finally it was Monal's chance to perform on behalf of Ariyana. She had to dress up in jute attire, and Amma was seen making fun of her.

At the end of the episode the coins tally was 60 for Akhil and 55 for Ariyana's team.

Housemates turning to household items? Avinash turns into bed with Amma Rajasekhar spreading on the bed, Sohel turns into a kitchen and gets scrapped, while Divi turns into a garbage bin which Amma uses gracefully.