Telugu 09th Oct, 2020 1h 06min Reality Show
Its 1st day of Sohel's captaincy and a problem welcomes him. Will the water problem be solved...if so, in minutes or hours? watch today...
CRITIC 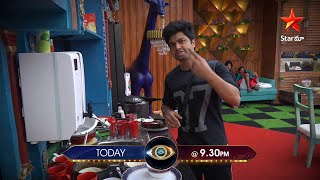 The day 33 Bigg Boss Telugu 4 on October 9th began with Bigg Boss making fun of Sohel, the new house captain who complained regarding the shortage of water. The latest episode of Bigg Boss Telugu 4 was somewhat packed with emotion as the members of the house spoke about the saddest and happiest moments in their life.

Noel, in the 'Morning Masti' task spoke regarding his love towards his mother while Lasya spoke emotionally about how she embraced motherhood besides saying how her son gave a new sense to life.

Avinash opened up that during lockdown he was in suicidal thoughts as he faced a financial crunch. He requested every member of the house to look after their parents with care and never ignore parents irrespective of whatever the situation is.

Gangavva revealed about her reckless son who never took care of her and her daughter who succumbed to seizures.

Sohel picked Akhil and Mehaboob for a task of the subsequent luxury budget task. As per the given task, the contestants had to reach the ramp’s top by crawling to take luxury budget commodities hanged there. Mehaboob was the winner of the task and Monal head massaged him.

Following this, Avinash entertained everybody with a humorous task in which he acted as if Bigg Boss possessed him. Apart from giving witty replies to the questions asked by the members he even gave meaningful advises to them as he was acting as the Bigg Boss.

The members of the house had some fun by cracking jokes amongst themselves and taking part in Antakshari. Divi said to Monal towards the episode's end that she committed a blunder by giving an impression to Akhil and Abhijeet that she liked both of them.

Its 1st day of Sohel's captaincy and a problem welcomes him. Will the water problem be solved...if so, in minutes or hours? watch today...