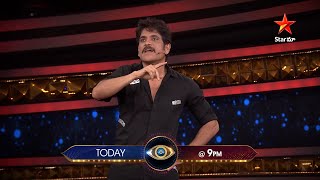 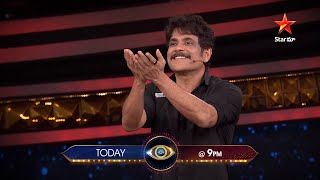 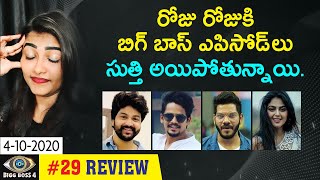 The day 28 Bigg Boss 4 Telugu episode on 4th October began with Swathi Deekshith's post-elimination talks with the members. She gave her opinion about them and awarded a tag for each person besides advising each member.

Swathi placed the ‘Bigg Bomb' on Amma Rajasekhar thereby blocking him from no chance to participate in the upcoming week’s captaincy race.

According to the new task that focused on helping the members realise each one’s problems, the female members dressed like male members and vice versa. Each member changed his/her names that were all most all identical to their original names. Female members ramp walked, did funny skits and danced to hit numbers. Host appreciated Ariyana and Sohel’s dance; Sujatha-Amma Rajasekhar’s sketch and specially mentioned about Kumar Sai.

The house members then got split into 2 teams (A and B) and played 'Balloon Kabaddi'. In this game, each team member had to pop the balloons of the other team members. In the game, Avinash acted as both the referee and the commentator. Team A consisting of Mehaboob, Sohel, Divi, Harika, Monal, Noel and Ariyana won the game.

The nominated members then talked about and stood based on each one’s fame. Harika, Kumar and Sohel contested for the 4th number. The house members then came to a decision that Sohel is apt for the 4th position, Kumar Sai was placed at 5th position and Harika got placed at the 6th position. Host Nag stated that all the house members were completely safe and the numbers they gave to each other were not true, as per the audience poll.

Before signing off, the host Nagarjuna advised every member of the house to keep doing best and performing well in every task they will be awarded in the future.

Yesterday was Swathi Deekshit's turn. Who's turn is today amongst 6 nominations? Watch today @ 9pm as 1 gets eliminated.